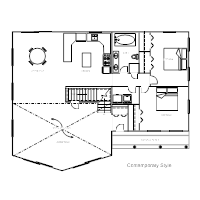 A railroad-style apartment is a dwelling traditionally found in older tenement buildings or subdivided brownstones with a layout consisting of succeeding rooms that lead into one another often via a central hallway from front to back. This means you have to walk through one room to get to another, as if moving through the cars of a train (hence the name).

History of the Railroad-Style Apartment
The design of railroad-style apartments was a response to overcrowding in cities in the U.S. in the mid-1800s. Railroad-style apartments were built into the early 20th century in tenement buildings and subdivided brownstones primarily in urban areas such as New York City, San Francisco, Chicago and Washington D.C. but can be found elsewhere.

Railroad-style apartments were constructed at a time when building regulations around sanitation, light, air, and privacy were not yet standard and amenities such as elevators were not part of the package. While today’s architects and interior designers have used creative solutions to make original railroad-style apartments livable and even desirable in the 21st century—principally by focusing on creative ways to divide the space, create built-in storage, and let in more natural light to the apartment core—railroad style layouts are generally considered awkward by modern standards and tend to be less desirable.

The term “railroad apartment” is often described in the same breath as “shotgun-style” apartments and homes found primarily in the southern United States, where they were the most popular house style after the Civil War and into the 1920s. Shotgun homes, whose roots are traced back to Haiti, have narrow front profiles and long rectangular silhouettes. Whereas railroad-style apartments often have a central hallway similar to that of a series of train cars (or a side hallway with multiple entry points in the style of a train sleeper car), narrow railroad apartments that aren’t wide enough to fit a central hallway often skip it in favor of dividing curtains or archways. In a shotgun-style apartment or house, the rooms are connected directly to one another without hallways.

While there is debate over the origin of the “shotgun” moniker, modern real estate folklore claims it’s a reference to the fact that a bullet fired from the entrance could theoretically travel in a clear shot to the back.

Railroad- and shotgun-style apartments and homes are modest dwellings but they do share some DNA with the historical “enfilade” style found in European palaces chiefly from the Baroque period going forward, in which one room leads into the other, creating perspectives and a sense of grandeur. The enfilade style of interior architecture is also common to museums in which one gallery leads into the next.

Characteristics of a Railroad-Style Apartment
Commonly found in tenement-style, walk-up, multi-family buildings
Long and narrow rectangular floor-through layouts
Rooms flow into one another generally without hallways
Railroad layouts may include one central hallway, room-dividing archways, or in some cases a hallway off to one side with multiple entry points
Tall ceilings
Windows at the front and/or back but not in the long middle portion
Few closets and little storage
Range in size with generally 3-5 rooms
Bedrooms often placed on the far end for flow and privacy reasons
Kitchens often in the middle
Living spaces frequently at the front
Bathrooms might be off to the side of the bedroom(s)