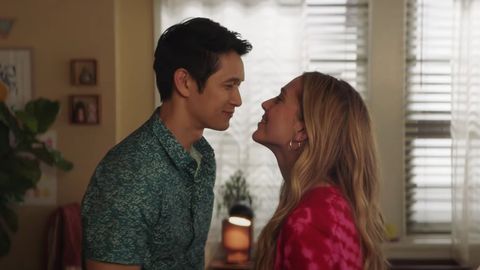 Shadowhunters and Glee star Harry Shum Jr is set to star opposite Happy Death Day’s Jessica Rothe for upcoming drama All My Life – and it’s safe to say that the film’s first trailer is an emotional one.
Based on the story of a real-life couple, the movie follows Solomon Chau (Shum Jr) as he meets and falls in love with Jenn Carter (Rothe).
As detailed in the teaser, the pair soon begin to build a life together, with Sol and Jenn moving in with one another before Solomon lands a job as a chef at Jenn’s friend’s restaurant and the couple continues to go from strength to strength.
Things have never looked brighter, so Sol proposes and of course Jenn says yes, with the pair going on to start planning their wedding.

Related: Everybody’s Talking About Jamie reveals emotional first trailer for musical adaptation
But their absolute bliss is interrupted when Sol’s health suddenly starts to deteriorate, and he’s unexpectedly diagnosed with liver cancer.
“If we get bad news, we’re getting a dog,” Sol tells Jen while they’re at the hospital.
“Don’t say that,” she replies. “We’re getting good news.”
But the next scene, which sees Jenn arrive at their building to find Sol waiting outside with a new pet pooch, soon confirmed otherwise.

Related: The Walking Dead star Steven Yeun’s acclaimed next movie gets full trailer
“We don’t have much time left,” Sol later tells Jenn.
But it looks as if the lovebirds aren’t going to let that get in the way of enjoying what time they do have, as the teaser sees them learning dance routines with friends, watching sunsets on the beach, going go-karting and of course, tying the knot.

“Thank you for showing me what living is, what home is,” Sol adds. “You make feel like I can do anything – we can do anything.”
Think we’ll definitely need some tissues for this one!

Alongside Shum Jr and Rothe, the movie also stars The Handmaid’s Tale’s Ever Carradine, The Greatest Showman’s Keala Settle, Pitch Perfect’s Chrissie Fit and Saturday Night Live’s Jay Pharoah.
All My Life is due to be released in UK cinemas on October 23, 2020.